The last piece of the puzzle (I think). The M1500WWN is inspired by the MiUK M1500WN from back in the day and was the last of the reissued colourways on the 1500’s that have dropped over the last few years. I think this is one of my favourites, super wearable and clean with that white leather. 💥 - Thanks to @danbaker91 for coming through once again with the assist. #nbgallery
First time on for these MiUSA @newbalance M999CP1 x @cncpts ‘Hyannis’. Really good shoe. 🔥 #nbgallery
Checking in on another pair recently. The MiUK @newbalance M577SNS2 x @sneakersnstuff from 05 is one of the best from Peter and Erik. The colours used are simple but the colour blocking and materials used are what make these a stand out pair. 💪 #nbgallery

@daryl_chan with a great shot of the #MADEINUK 🇬🇧 @newbalance 577YP ‘Yard Pack’ 👌 The toe shape on this pair was crazy sharp! One of the best packs in recent years alongside the ‘Surplus Pack’. 🔥 - #nbgallery #nbgallery577 #newbalance #yardpack
Hi Dad! 👋 - Sometimes you’ve just got to keep things simple and these @newbalance CT1500SA are the perfect way to do that. Available via @afewstore now! 👌👀 - #nbgallery #nbgalleryct1500 #newbalance
Paperboy X New Balance . 17.01.20 . @wutangchiang in the 801 “Tataki”, 1 of 3 colourways releasing this week. . Hit @paperboyparis for more details. . #nbgallery #newbalance
Follow thomaslindie on WordPress.com

We’ve just had one worldwide Ronnie Fieg release, and only 4 weeks later, another one will be upon us, and as always, no matter what he puts out, there will always be MASSIVE hype surrounding it!

There had been talk for a while of Fieg doing another New Balance, with plenty of rumours speculating as to what model, some saying 997 (which may still not be ruled out for next year..) and others saying 1600, which of course, that is now confirmed with the first full pictures being released following some earlier teasers.

I’m not the biggest Fieg fan but I appreciate the position that he has managed to reach now, and obviously, for many ‘sneaker’ lovers, that is where they want to be, designing their own colour ways on some of their favourite models and having them sell out in minutes.

Anyway, with regards to the shoe, an Asian made New Balance 1600, first thoughts on hearing this before the images? I guess I wasn’t really looking forward to it as the 1600 has never been a model that’s appealed to me, and much like Flimby made products, Asian manufacturing has went downhill over the years.

However, surely with Ronnie stating that they will be “the most premium NB upper you will ever see in your lifetime”, I guess we were all pretty intrigued..

As with any big release, the good folks over at Crepe City, put a post on Instagram to gauge people’s reactions to the 1600, and here’s a screen grab of the comments and/or possibly everything that defines ‘hype’; 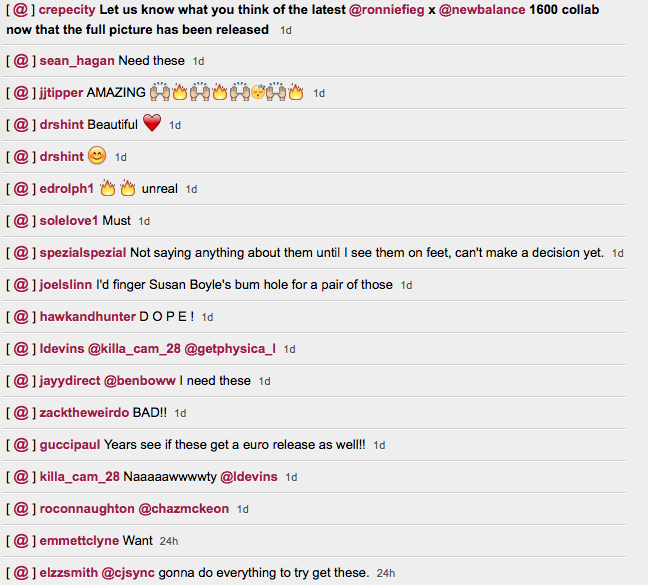 My first impressions of the shoe is one that if you know me, it won’t surprise you;

Overkill or what? Is it really necessary to include them on every release, whether it be RF or a GR? + in my opinion, they look horrific on this model and make it look really ‘cheap’.

Secondly, the lace locks, unlike his Asics releases, he includes branding on his NB collaborations, but again, I think they’re better served elsewhere and not on this pair.

I always thought that Fieg was up for doing designs and colour blocking that had never been done on shoes before, but it seems that certainly from some of his past releases, he’s following suit on other stores techniques, for example, the block coloured toe which seems to be extremely popular after all the Solebox releases.

However, it’s not all bad, I feel that he has definitely used the panelling on the 1600 to it’s maximum potential, showing off the excellent material use. Also, the micro-perf on the saddle and heel is a nice touch, but if used too much, could give off a sort of ‘cheap’ look.

On a final note, a lot of NB collectors/enthusiasts would overlook these, but that’s not going to stop them flying off the shelves…

Look for a release at KITH on the 29th of November, followed by a worldwide release on the 14th of December.

Check out more pictures below; 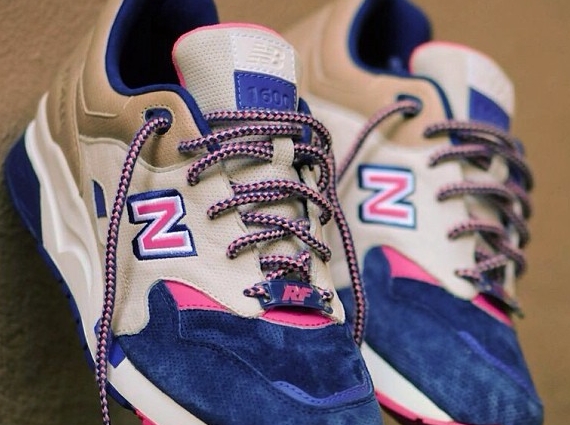 Above images taken from Sneakernews.com.