Should have been a post on the 1300JP3 this weekend but won’t be sometime next week until they’re in my hands so looking at these beauts again. Unreal couple of pairs. The sorta shoes that you can rock for the rest of your life. #nbgallery
That new new @hanonshop. “In our 30th anniversary year, we share a celebratory dram with Japanese sportswear company @mizuno_sportstyle as we blend both countries love for whisky for our take on the Sky Medal - ‘The Angel’s Share’.” 🔥 #HANON #MIZUNO #THEANGELSSHARE
Me in shoe form but in navy. Nice one @newbalanceuk ✊️ #nbgallery

I had some time to kill on Friday, and the weather was pretty great, so I met up with Jordan and headed down to a park near me for some shots. He brought along a couple pairs of Adidas, one being the Ardwick x Oi Polloi (box and all – weird), and the other being the Centaur x hanon shop. 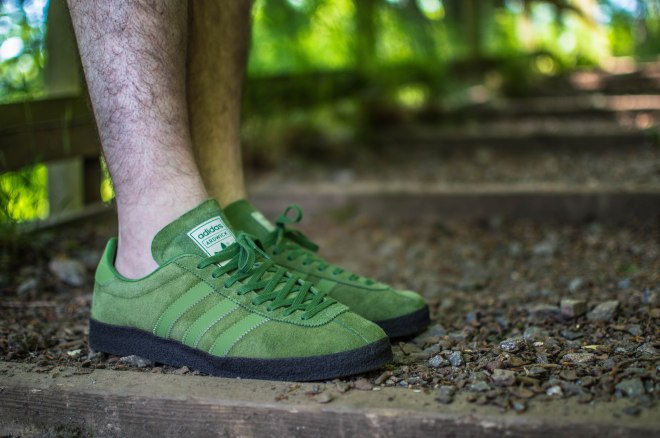 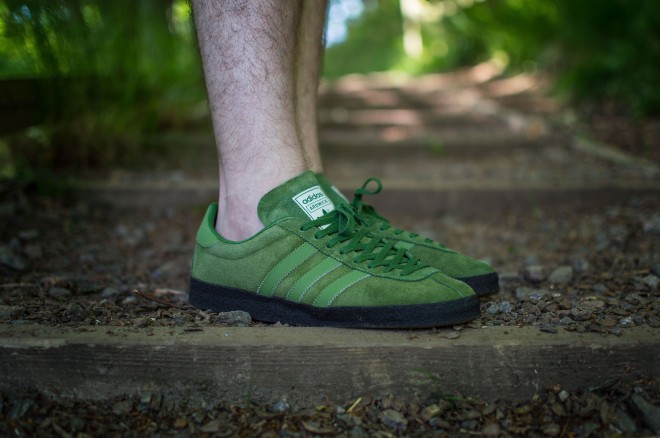 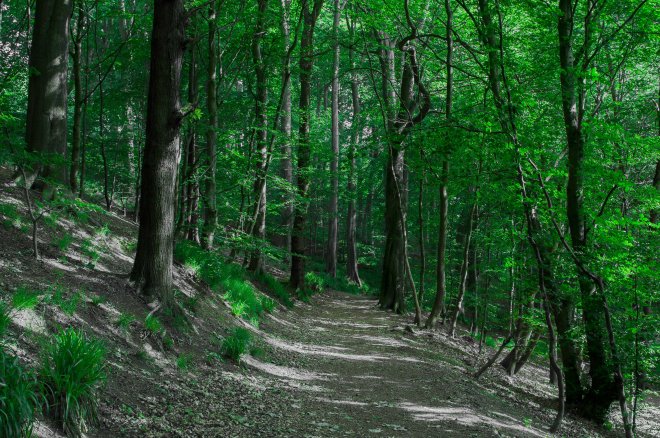 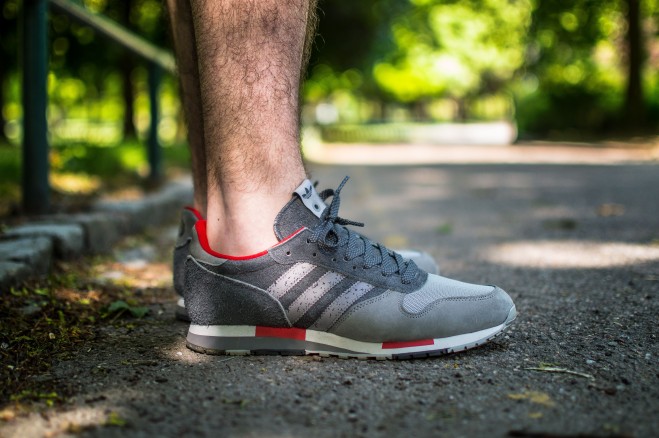 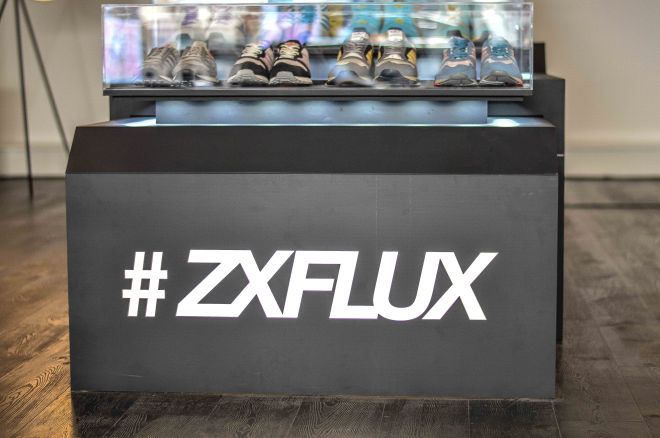 In conjunction with the Crepe City 10 event, the good folks over at Adidas Originals set-up a really unique exhibition just around the corner from Truman Brewery on Dray’s Walk. If you didn’t swing by and check it out then you really did miss out, but luckily, I swung by and took some shots for you all to check out.

Adidas are celebrating the 25th Anniversary of the ZX8000 which was first introduced in 1989 and featured continually throughout the 90’s, but they’ve switched things up this year and created the ZX Flux.

However, before we get into the ZX Flux, why not take a look at the evolution of the Adidas ZX range? 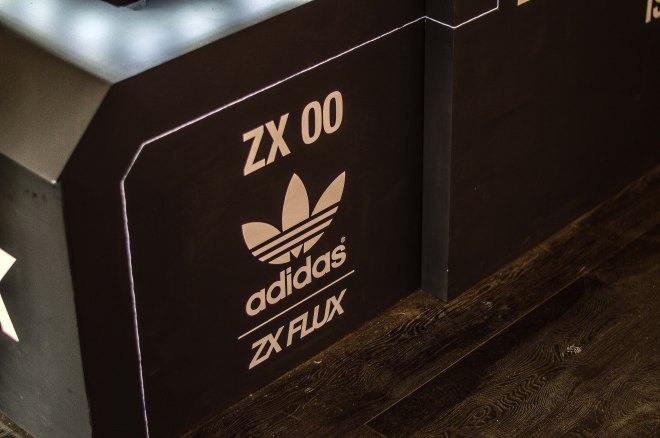 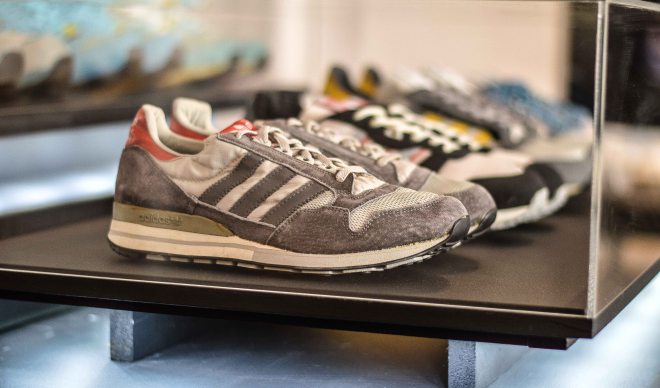 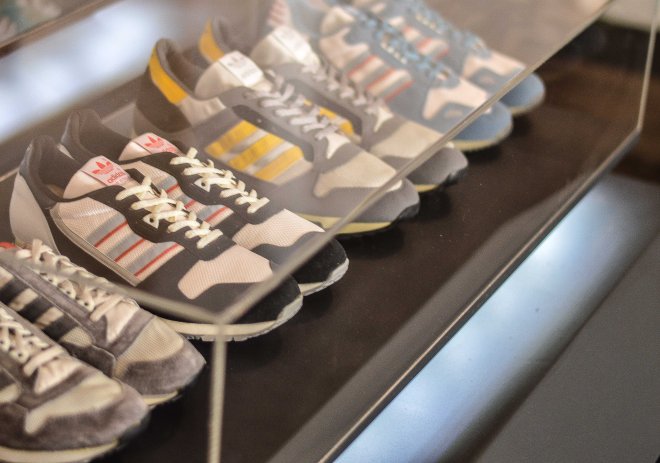 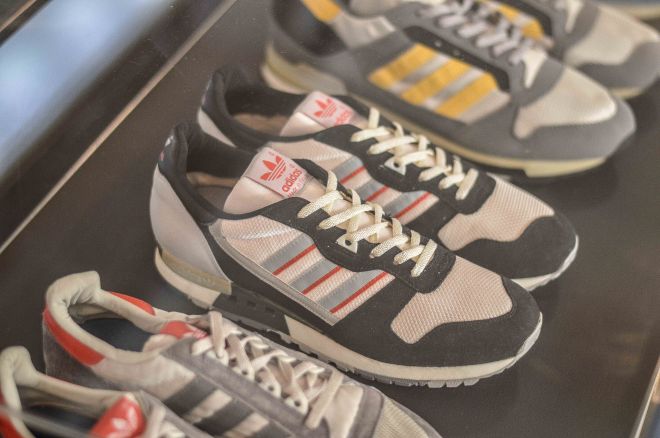 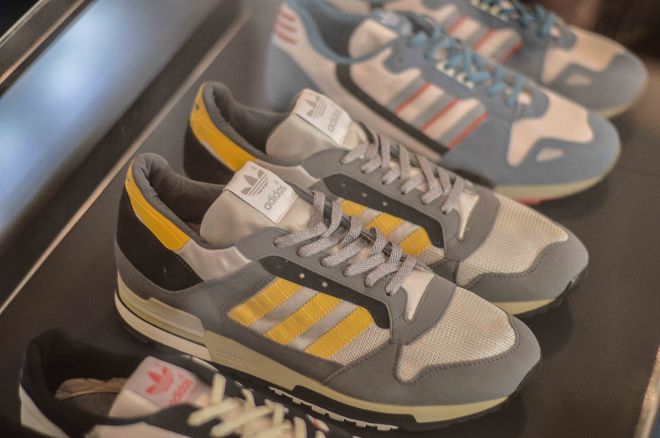 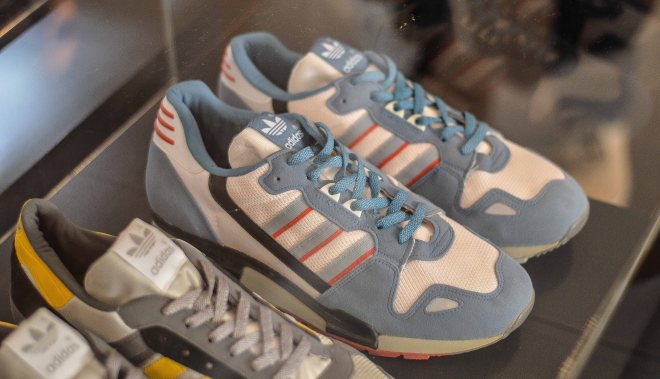 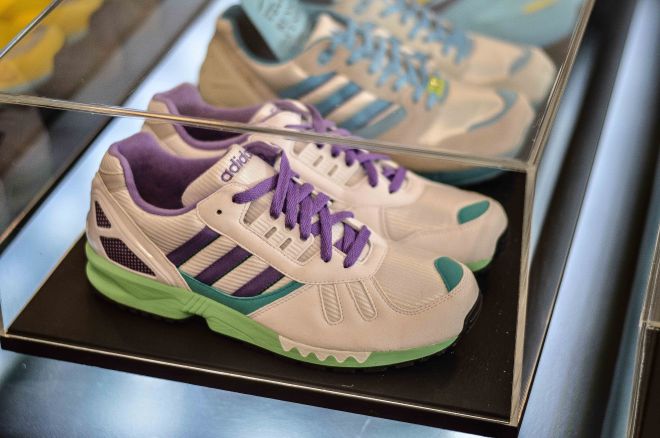 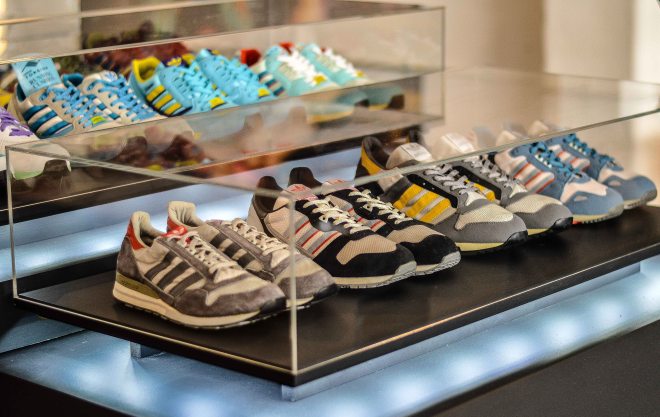 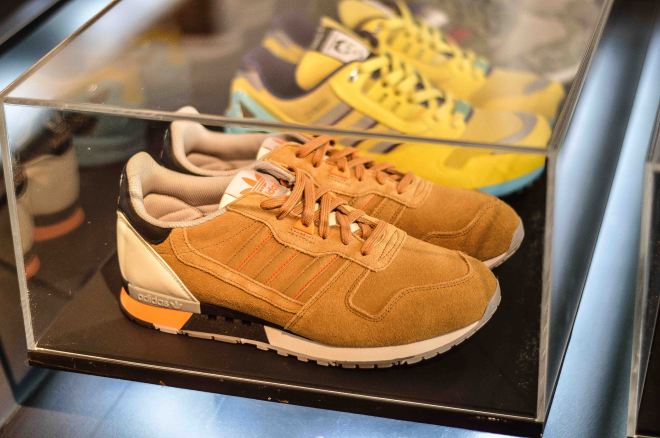 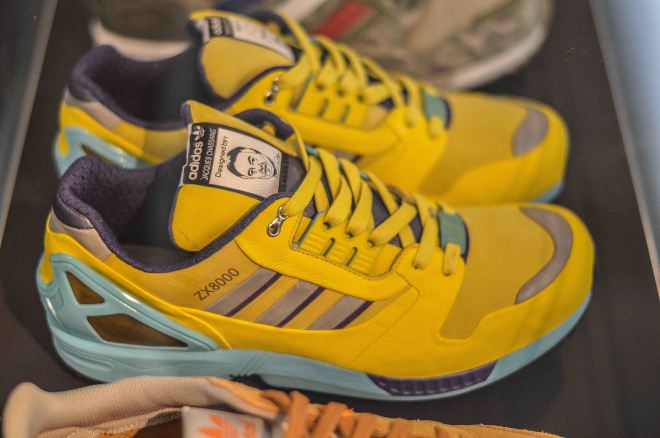 If you were lucky enough to be one of the few invited to the ZX Flux event on the Thursday night prior to Crepe City 10, then you’d of been lucky enough to hear the man of all things three stripes, Robert Brooks, talking you through the evolution.

There truly were some absolutely amazing pairs of Adidas ZX on show and if you like your Adidas then I’m sure you will agree. It was a privilege to be able to view these in person so big shout to Brooksy for bringing them along!

The epitome was the Adidas ZX series was the last on show and sat side-by-side with it’s revolutionary new ZX Flux version limited to only 100 pairs, which really is a tremendous sight.

The ZX Flux introduces a clean and simple silhouette, which is specifically made to focus on performance. The model pushes boundaries with it’s streamlined construction with form fitting one-piece upper and heel cage for support.

The full Spring/Summer 14 collection was on show at the pop-up store so be sure to check out the following images. 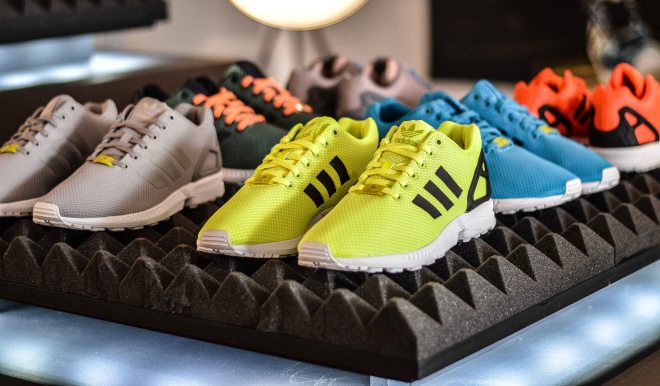 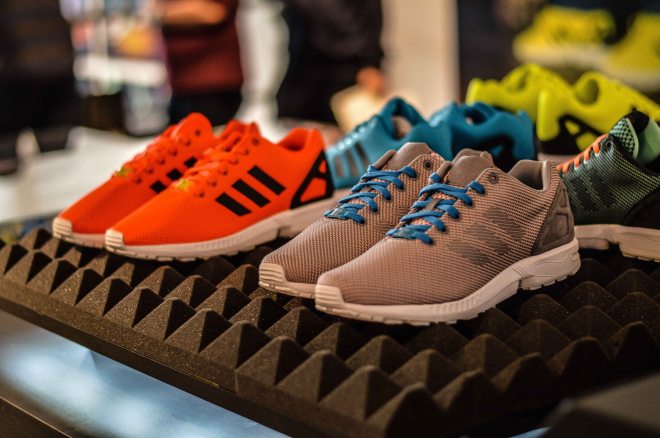 There are already numerous colourways available of the ZX Flux and they’re nothing short of great, particularly the multicolour prism from the ZX Flux Photo Pack which has gotten everyone a little excited.

The image above shows just three of the colourways available already of the ZX Flux and gives you a taster of what sort of designs are possible on this shoe. We reckon Adidas should let their imaginations run wild! 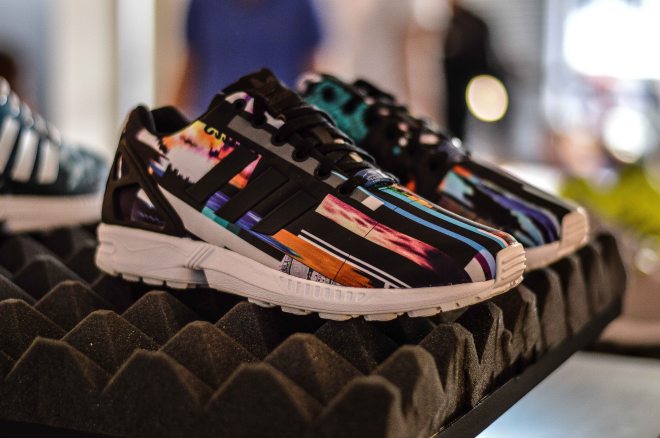 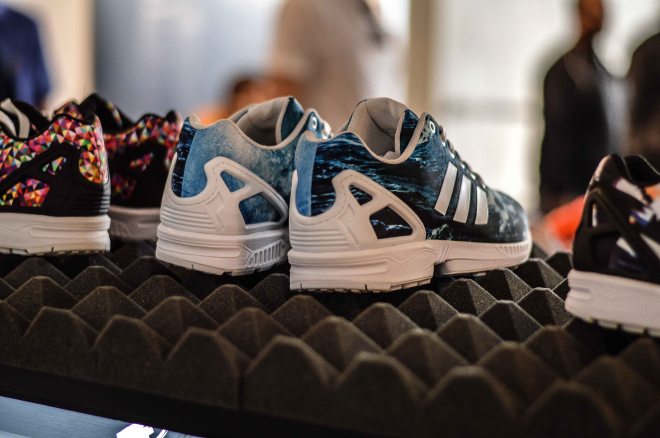 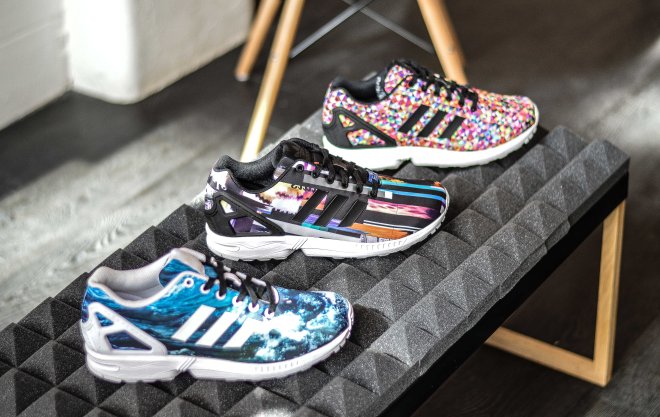 As well as the Photo Pack, Adidas are also offering up the ZX Flux Weave Pack and other colourways with this weave style upper. Some may think these are similar to a Roshe Run, which may be true, but we have to say, these are a cut above. The weave on the Flux is a lot thicker than the Roshe, but they’re still amazingly light.

If you’re unsure of the ZX Flux with the graphics, then be sure to try on a pair of the woven style and you might just go home with a pair.

There were two ZX Flux that we saw a lot of over the course of CC on Saturday, the F&F ‘never to be sold’ purple weave, and also the purple consortium pair. As you can see, there isn’t a great deal of difference between the two, but the consortium pair features an orange outsole, white heel cage and also a numbered lace lock. 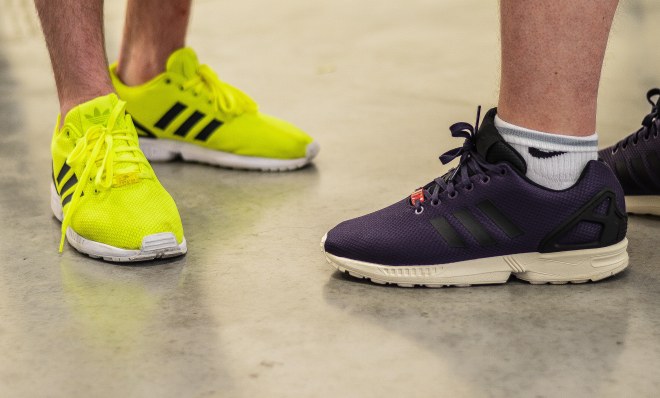 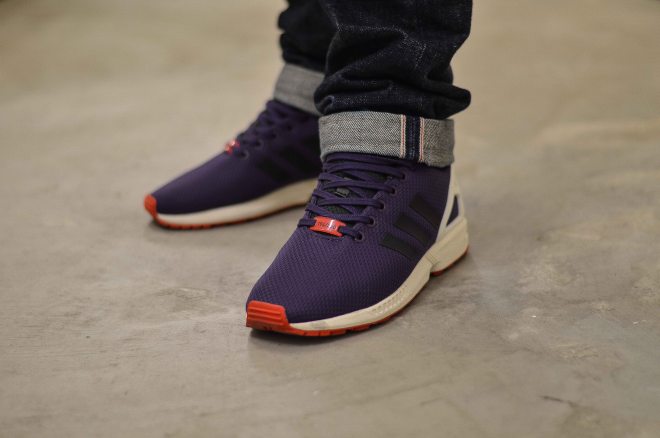 The super talented Josh Parkin was also on hand to do some illustrations, and if you haven’t already checked out his unique style of work, you’re missing out big.

You can find him over on instagram @joshparkyart, he’s also doing some commissions if you’re looking for a personal piece!

Be sure to grab a pair of ZX Flux and keep your eye out for the next drop as the first lot flew out the door FAST!

Thanks again to Adidas for supporting the Crepe City event and everyone who was involved in setting up the ZX Flux installation, it was superb.

I’ve always had a bit of a thing for the Adidas Stockholm, it’s undoubtedly by favourite model from the City Series, and when Sneakersnstuff Stockholm collaborated on this model, it was always going to be a great shoe.

This collaboration was released back in 2009 and features a suede upper like no other (the knap is superb), and also asymmetrical blue and yellow three stripes, and everyone’s favourite gum sole. 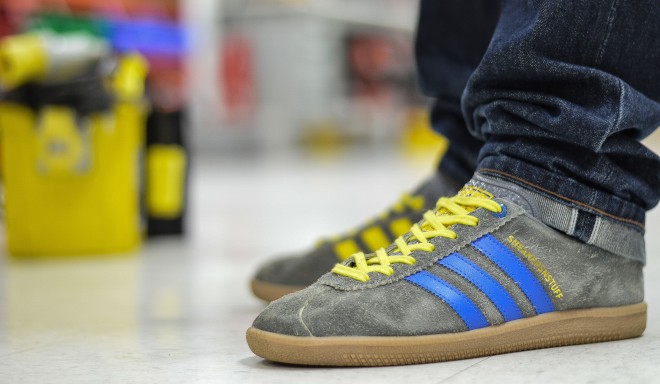 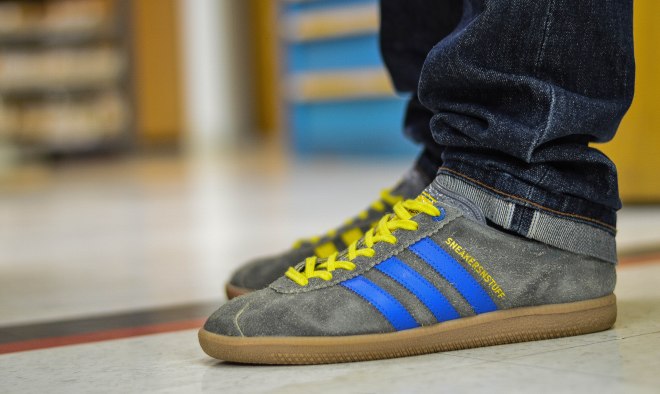 There was a lot of talk about this subject on Instagram and the likes with there being a specific account setup for a number of Adidas Collectors or merely just people with Adidas in their collection, to submit their top 5, and then for the votes to be collated, etc, etc, etc, with a final top 5 being named sometime in December.

Personally, I can’t say I picked up many Adidas releases this year in comparison to previous years or other brands, but I’m still going to provide my top 5. I’d also be inclined to say that this is in no particular order, and I’m also fully aware that it only features classic runners…. different strokes for different folks and all that jazz. 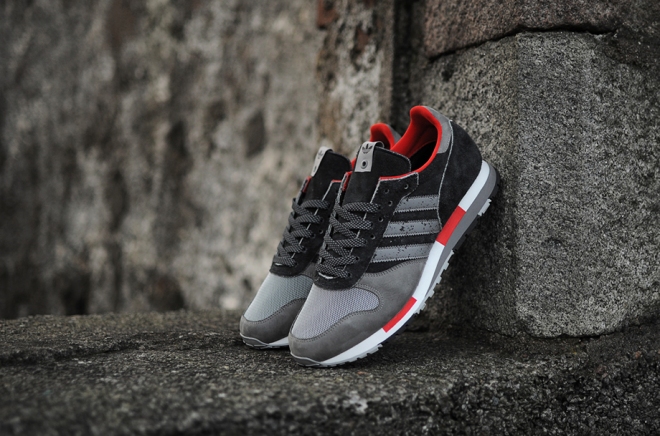 One of the very first Adidas releases of the year, Hanon Shop teamed up with Adidas to bring out a reworked archive running shoe which has been in the Adidas vault since 1984. They reworked the CNTR to pay homage to Hanon’s hometown of Aberdeen, which holds the nickname of the Granite City. One of my personal favourite features of this shoe is the use of 3M, particularly on the three stripes to depict the Granite rock, and also the 3M lace set. In my opinion, his pair from the Consortium range was 1000x better than the three other pairs of CNTR released in boring block colourways. 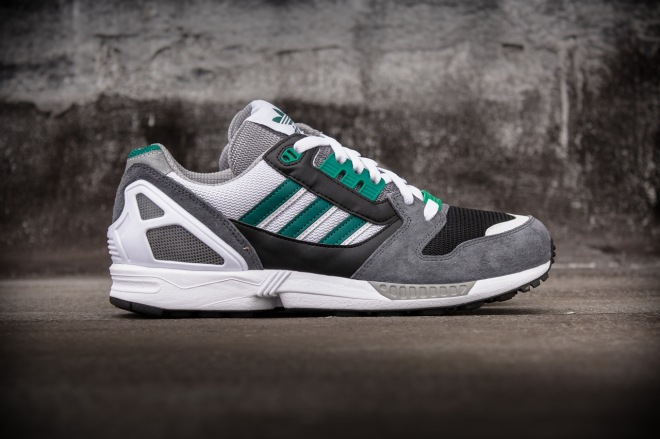 The pick of all the Adidas Japan packs released this year, and to many this pair looked very similar to a previous Consortium EQT which released in 2010. Anyway, as the EQT range is already considered one of the best Adidas series, it was inevitable that this pair would also be a hit, especially with the popular grey, white, green and black colourway teamed with a flawless suede, mesh and leather upper, Mita nailed this, and made plenty of people happy who are unlucky enough not to own the Consortium EQT. 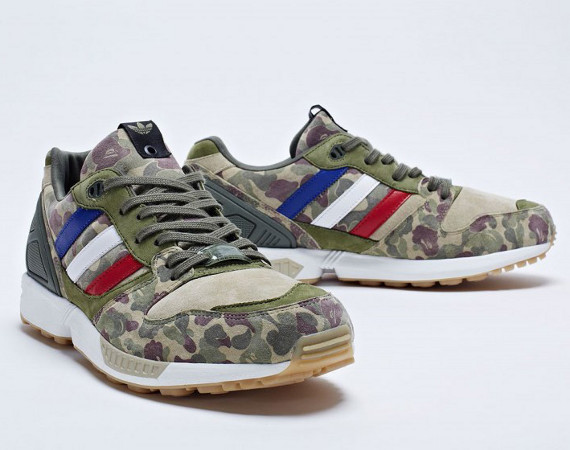 A massively anticipated release, especially following a delay and some pairs being sold when they weren’t meant to be, the Adidas ZX 5000 x UNDFTD and BAPE was a big favourite from this year, however, the change of the toe box materials from suede to nubuck wasn’t great. I personally hate toe box creasing, and after wearing this pair for half an hour, the creasing is relatively visible.. anyway, that’s only a small gripe! Part of a pack of three, Adidas teamed up with two heavyweights for another Consortium release and reworked this classic silhouette with a stunning camo upper, finished off with everyone’s favourite gum outsole. 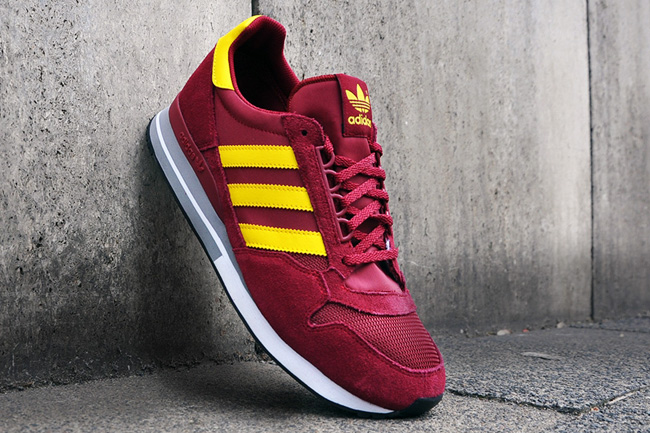 Image taken from Kicks On Fire.

One of my personal favourite ZX models is the 500, and this classic Cardinal Red colourway suits it perfectly. Although it’s no big Consortium release or a collaboration with a store, it warrants a place in my top 5 of this year, not just because I bought it, but because it proves that simple colourways teamed with suede in mesh on a running model are always the best releases.

This year also saw the release of a long awaited classic 90’s running silhouette; the Adidas Torsion Integral S retro in the OG colour way along with two other new colourways. For me, and like many others, the OG colourway was the pick of the bunch and a must have for anyone not lucky enough to own the original from almost 20 years ago. Although the toe box is a lot more ‘boxy’ than the OG, it’s still a great shoe and definitely one of the best pairs released by Adidas this year.

December will also see the release of Sneakerfreakers take on the Torsion Integral S and I’m almost certain that the mint pair from that pack will feature in many top 5’s.

It’s been a strong year for Adidas, in every department, and this is only going to continue as we approach 2014, I’m particularly looking forward to the rest of the running models to drop in the new year.

One of my favourite releases from this year.. Adidas dug out the CNTR from their massive vault and let Hanon rework it to produce this collab which pays homage to Aberdeen’s granite.